Even Ducks Cause Traffic to Backup in Gatlinburg!

Traffic in Gatlinburg can be extremely frustrating at times. Our little city was built to be quaint and charming. Because the Parkway was built for pedestrians, it isn’t exactly driver friendly. The speed limits are low and the traffic lights and pedestrian crossings are plenty. The traffic in Gatlinburg can cause hours of waiting during our peak seasons, but there are ways around it.

One of our team members actually caught some great footage of a major backup of traffic in Gatlinburg. Take a look!

We’ve put together some tips on how to avoid getting stuck in peak season Gatlinburg traffic. If you’re coming to town you might want to take a look before deciding on how to navigate the roads. We may just be able to save you some time.

Tip #1 – Avoid the Gatlinburg traffic by traveling during hours that the traffic isn’t bad. Traffic in Gatlinburg starts building up around 10am and doesn’t let up until about 8pm. Consider doing your driving during less busy driving hours.

Tip #2 – Take the back roads. Instead of taking the parkway in downtown Gatlinburg, consider taking the River Road and parking off of the strip. There are plenty of lots available and you’ll avoid the bumper to bumper traffic on the parkway. River road also connects with Ski Mountain Rd. So this is a great way to get to Ober Gatlinburg and to your cabin if it’s in this area.

Tip #3 – Walk. The best way to avoid the heavy traffic in Gatlinburg is to walk. Instead of driving, park at the garage by the aquarium and walk to your destination.

Tip #4 – If you’re planning on spending a lot of time in town, consider reserving one of our Gatlinburg cabins within walking distance of downtown Gatlinburg. You’ll avoid all of the Gatlinburg traffic and the walking will help you get rid of the calories from our delicious home cookin food.

Tip #5 – Avoid the Parkway altogether. If you’re coming to town but don’t want to hit the major traffic in Gatlinburg on the way to your cabin, here are a couple of options:

Tip #6 – Plan your trip ahead of time. Don’t plan on driving around town and looking for something to do. This is a sure fire way to get stuck in the Gatlinburg traffic. Instead, decide on your main activities before you come to Gatlinburg. 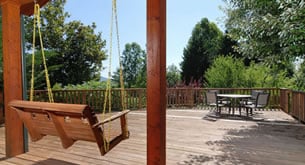